A lifetime commitment to building transformational gifts over time 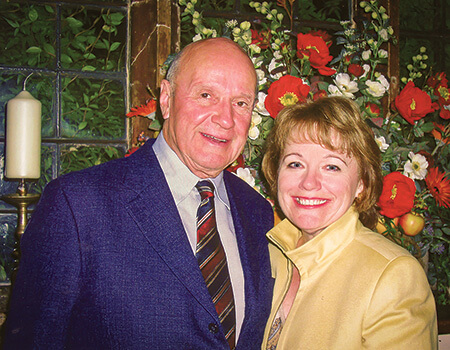 Prominent Alberta business and community leaders Bill and Sharon Siebens were honoured for their lifetime of philanthropy at United Way Worldwide Leadership Council’s Roundtable on Philanthropy on October 2 in Banff.

As long-time supporters of their local United Way, Bill and Sharon’s social investments are credited with impacting thousands of lives in Calgary and the surrounding area.

Sharon remembers a story about a community kitchen that set up a food truck to help feed hungry kids during the summer months.

“One day, two boys, about nine and 13 years of age, were milling around, so the staff invited them over for some food. The younger boy sat down on the picnic bench, opened up the lunchbox, and started stuffing the food in his mouth as fast as he could, as though someone was going to take the food away from him. His older brother just stood back, watching his little brother eat. When the staff asked him if he’d also like something to eat, the older boy responded, ‘No, it’s ok. Today is my brother’s turn to eat,’” she recounted.

“I couldn’t believe this was happening in my city.”

Since then, the Siebens have invested $10 million over many years in collaborative efforts that address the root causes of some of Calgary’s most complex social issues.

In philanthropy, as in business, the Siebens’ top priority has been working with others to identify opportunities for high return on investment, such as Financial Empowerment and All In for Youth, two initiatives pioneered by the Siebens.

Financial Empowerment grew out of the Financial Stability Initiative, a poverty-reduction program that helped raise individuals and families out of poverty by helping them access financial support, including tax credits and benefits. The Siebens, along with five other Calgary families, helped establish the initiative with a total investment of $1 million. That program has since evolved into Aspire Calgary, the major citywide Financial Empowerment Collaborative, and today, the tax clinic program alone has put nearly $9 million back into the pockets of vulnerable Calgarians.

“We are passionate about investing in programs that provide people with basic needs. We believe that everyone should be entitled to food and shelter, regardless of who they are—elderly, newcomers, or youth starting out,” said Sharon.

This passion led them to be one of the very first investors in All In for Youth, a collaborative high school completion initiative led by United Way. Over its first five years, All In for Youth has shown tremendous results. At one high school, the program has contributed to decreasing the proportion of students who do not complete high school on time by 44 per cent.

"You can’t just decide to end things like poverty or mental illness without first dealing with a lot of underlying issues. The issues aren’t simple; they’re complex and require a myriad of people and organizations working together."

The drive for new and innovative solutions continues with the Siebens today. This past year, United Way approached the Siebens about its newest project – The Social Impact Lab – an experimental innovation space where United Way agency partners, donors, government, and community members can come together to develop new solutions to Calgary’s most pressing social issues. The Siebens’ investment is helping fund the first project to go through The Lab – the Children and Youth Mental Health initiative. Since June 2018, The Lab has been working with a network of organizations to address gaps in the current systems that make it difficult for children and youth in Calgary to receive vital mental health support.

Inspiring others to give has also been an important part of the Siebens’ philanthropic journey. This is what motivated Bill to pitch the idea of a match program to United Way.

“We were having dinner with some friends, and one of the first things my friend said to me was, ‘I just want you to know that I wrote a big check to United Way because I want you to have to match it,’” he added laughing.

Because of the success of the original match program, other families have since been inspired to join the Siebens in matching others’ contributions. In 2017 alone, 970 new Leadership Donors, inspired by the matching program, contributed nearly $1.6 million in new funds to support vulnerable individuals in Calgary and the surrounding area.

“If we can inspire others to give, from our generation and also from our grandchildren’s generation, through matching or other programs, that makes a big difference. Then if United Way can turn around and invest that money and multiply the impact, that’s return on investment. That’s real community impact,” said Sharon.